Comfortable suite with ceiling fan and safe 5 min from Supermarket

Private room in the best location in Polanco. Located on Horacio Avenue, Polanco is characterized by having some of the best restaurants in the city. In addition, the type of food is diverse and for all tastes. … Living in Polanco you will never get bored, as this area is home to several museums, shopping malls, parks, galleries, and entertainment centers. The neighborhood is surrounded by restaurants, bakeries, pharmacies, parks and more.The spaceIt has a private terrace that makes it great to go up for a beer, read a good book or work. This guest house is located in the heart of Polanco with many amenities, restaurants, cafes, supermarkets, banks, ATMs, pharmacies and dry cleaners.Guest accessYou can occupy and share with other guests the kitchen, Roof Garden, two small rooms and laundry room.Other things to noteAny additional services such as cleaning and concierge, we can manage them through the messages of the platform.

Its unbeatable location, along with its commercial and cultural offer, makes Polanco one of the most sought-after neighborhoods, perhaps the most, in the entire city. And in order to understand why this label is so important, you only need to spend a few hours to visit it. Polanco is the best located neighborhood in the capital. Being located between the most centrally located neighborhoods such as Roma, Condesa and San Miguel Chapultepec, and the beginning of the Defeño suburb, which opens with the Lomas de Chapultepec, places it in an unbeatable position. In addition, it is next to the Chapultepec Forest, the main green area of the city. The neighborhood is demarcated by the following avenues: Reforma (to the south), Ejército Nacional (to the north), Mariano Escobedo (to the east) and the Boulevard Manuel Ávila Camacho (to the west). In addition to these, Polanco is crossed by Presidente Masaryk, famous for its renowned stores. The development of luxury apartment buildings and shopping areas in Polanco has been very successful. Today, traditional families, a growing community of foreign executives and young independent professionals coexist here alongside corporate headquarters of large companies; Embassies and Consulates; art galleries, international schools; the most exclusive boutiques; cafes and restaurants with all kinds of food for all tastes and budgets (including excellent taquerías and two of the top 50 restaurants in the world); supermarkets; banks; gyms and yoga studios; doctors’ offices; hospitals; and within walking distance one of the city’s most important shopping centers, which has VIP movie theaters and all kinds of boutiques. Also within walking distance are the National Auditorium and other theaters and entertainment centers, multiple museums such as the Museum of Anthropology and History, the Museum of Modern Art or the Tamayo. 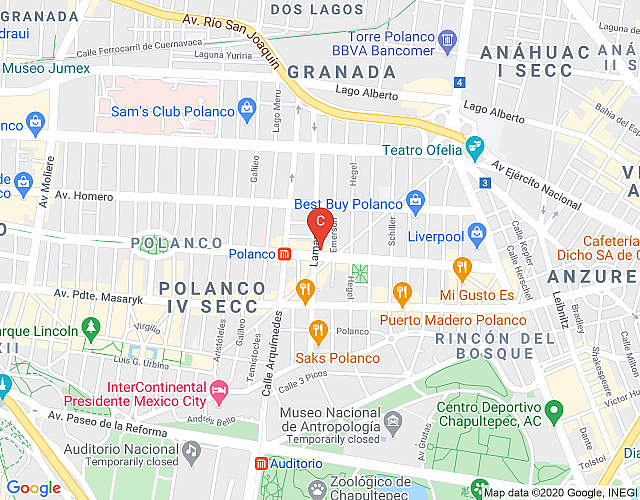